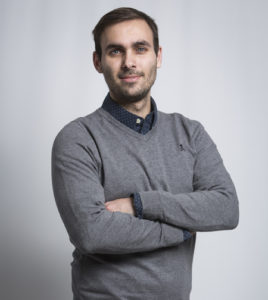 Born in Madrid. He completed a degree in Bilingual Telematic Engineering and is currently studying a Master’s degree in Telecommunications. Since an early age he always liked to investigate electronic devices in the house – particularly the PC and innovative technologies. Having finished his degree in English he was chosen by Talentum which allowed him to develop his own business idea – an app to order taxis. This internship opened the door to more opportunities and he had the chance go to Silicon Valley.

Jorge is a hard worker, extrovert, ambitious and thoroughly keen to learn new things. The world of technology is in a constant state of change and due to his interest in modern technologies he is convinced that continual training and self-improvement is vital. His relationship with FUE began in 2013 in Telefonica where he had the opportunity to take part in the GAIA program.