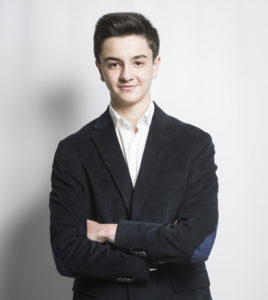 Born in Madrid. Currently in High School and the youngest member of the team. At the moment, he is swaying towards studying a discipline of Engineering, possibly software or computer. At only 14 he created an App that in little more than 5 months already had over 5 million users, and which was viewed on a daily basis by more than 100,000 people.

Furthermore, he created a game in the Appstore that had more than 15,000 downloads. He sees himself as a problem solver, self-taught, creative and someone who thinks before acting. He is a technology fanatic and the idea of changing the world through technology inspires him. It is difficult for him to explain the pleasure h garners from creating something from his own sheer energy.

He hopes to show that there are diverse ways of doing things in the world which can contribute to a more positive, global way of thinking